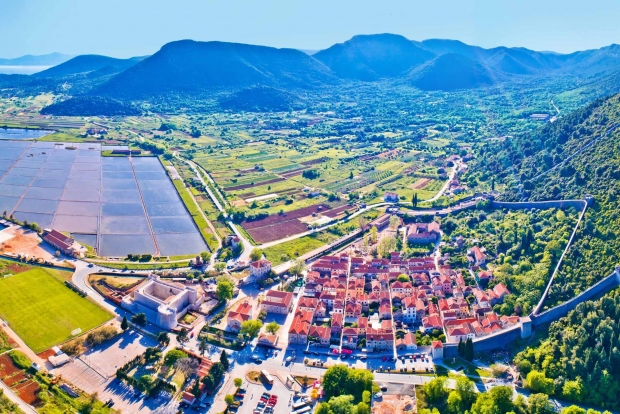 The best time to visit Ston is during the annual salt harvest which takes place every July and August. Salt production has been an economic mainstay since the Middle Ages and the saltworks of Ston are among the oldest and best-preserved in Europe. The salt is still harvested by hand and then loaded onto wagons for distribution.

On the northern end of the Ston isthmus, Mali Ston was founded in 1335 as part of the Republic of Ragusa. It was essentially a defensive town, meant to protect powerful Ragusa, with an impressive arrangement of walls and towers. The most outstanding feature is the fortress of Koruna, rising over the village and visible from quite a distance. The port of Mali Ston was completed in 1490 and clearly resembles the port of Dubrovnik with three arsenals, a round tower and a fortified port gate with a Romanesque statue of St Blaise over it.

Only one kilometre southwest of Mali Ston is the slightly larger village of Ston and connecting the two is an amazing wall of more than five kilometres. Circling Ston, the walls climb up to the hilltop Pozvizd Fortress and follow the line of the isthmus to meet up with the walls of Mali Ston.

The walls of Ston comprise the longest fortress system in Europe and second only to the Great Wall of China internationally. The walls stretch for 5km and include 40 towers and five fortresses.

An extensive 50-year renovation of the walls was completed in 2009. Why so long? Authenticity, that's why. Each new stone was hand-carved just as the originals were back in 1334 when construction began.

Ston was walled at about the same time as Mali Ston but had been settled as early as prehistoric times. The Romans named Ston Turris Stagni and it became an essential part of the Ragusa Republic. In addition to admiring the medieval architecture, take a look at the Veliki Kastio (Big Citadel) a large quadrangular fortress on the southeastern corner of town.