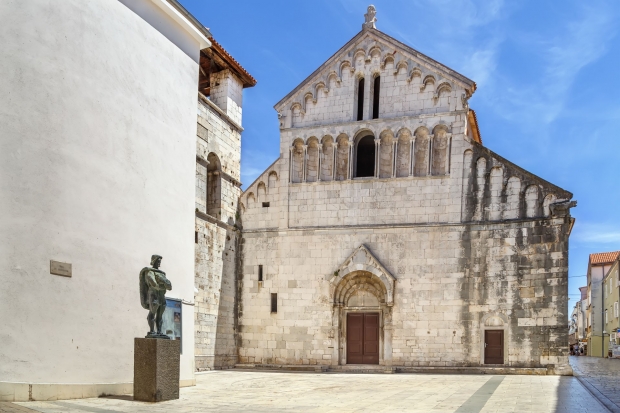 Zadar has been the capital city of Dalmatia for centuries and today is the centre of North Dalmatia. It is a city with rich cultural-historical heritage, first Croatian university (founded in 1396), a city of Croatian basketball, traditional Mediterranean cuisine and unique in the world sea organ.

We suggest you to join our sightseeing tour with local guide (80 HRK per person, if it is not included in the price of the cruise).

On the Roman forum, dating back to 1st century AD is situated the church of St. Donatus, dated to the 9th century AD, the most famous medieval basilica and the symbol of the city. Today is no longer used as a church, but due to its extraordinary acoustic features, it houses many musical performances.

Take a look at the Zadar cathedral, the biggest cathedral in Dalmatia dedicated to St. Anastasia (one of the four patrons of the town), and if you like you can climb up the cathedral tower and have a fantastic look at the whole town and its surroundings. Open Mon-Sat 10-17h (May); 9-22h (Jun-Sept). Closed on Sundays and church holidays. Entrance ticket 15 HRK per person.

Visit unique in the world Museum of ancient glass located at the city walls, just above the bridge in the harbor. Open Mon-Sat 9-21h, ticket 30 HRK.

Within the structure to the church and the monastery of St. Mary, next to the Archaeological museum, it is worth of seeing The Permanent Exhibition of Religious Art, one of the most worth-while exhibitions in Croatia, popularly called “GOLD AND SILVER OF ZADAR”. This priceless treasure has been preserved by the Benedictine nuns throughout the years, as well as during the 1991-95 war in Croatia, and some valuable exhibit items were produced by the nuns' hands. We recommend not to miss this exhibition! Open Mon-Sat 10-13h & 18-20h, Sun 10-13h; ticket 30 HRK.

Take a walk along the Zadar promenade (Riva) and enjoy the unforgettable sunset in the world with a view on nearby islands. Famed director Alfred Hitchcock said that the most beautiful sunset in the world can be seen from the spot on Zadar's sea promenade (Riva) where today are situated the unique in the world sea organ. They consist of several stairs that descend into the sea. Above the canal there are perforated stone stairs through which the sound comes out, the air pushed by the sea.

Right next to the sea organ shines The Greeting to the Sun installation, as a model of the solar system with its appertaining planets. The photo-voltage solar modules absorb the sun energy during the day, and then transform it into electrical energy by releasing it into the distributive voltage power network.